The Leeds City College Basketball Academy’s Men’s I team is celebrating its first full season in style after reaching the semi-finals of the Association of Colleges (AoC) National Basketball Men’s Knockout Cup.

Forming after the success of the first recreation team in 2019, the Basketball Academy strives to give basketball players the chance to play and train like professionals, while studying at college.

Increasing opportunities in the city

Run in partnership with Let’s Do More (LDM), the academy was set up due to a lack of city-wide basketball opportunities for those aged 16 and over. The collaboration with LDM’s community programme has helped to fill this void and provide opportunities for talented local players.

As well as the Men’s I team who will soon be heading to the AoC’s basketball semi-finals, there is an additional men’s and women’s team which began training last summer. The players also compete as a team in Basketball England’s Junior National League as Leeds LDM, where they’re on course to finish as runners up.

Loran Lewis, founder and director of LDM, has been working closely with the college’s players as they approach their first full season as a basketball academy.

“The teams have worked incredibly hard this season. The Leeds City College LDM basketball programme is relatively new, and there wasn’t much expectation on the players prior to the season beginning – this certainly isn’t the case anymore! Teams know that when they come up against this group, they’ll be in for a good game. The players are tough and work hard defensively, which is a reflection of the coach’s style of play.

“All the players train three times a week on court, and receive professional strength and conditioning training from Abante Performance, which has supported their development. Having the opportunity to play in both AoC and Junior National League competitions has helped, as they’ve had plenty of opportunities to grow as a team on and off the court.

“Basketball’s popularity as a whole is growing, with the undeniable cultural impact the National Basketball Association (NBA) has, paired with the increased visibility of the British Basketball League. The game provides all the benefits you’d expect from a fast-paced sport; excellent for physical fitness, mental health, making friends and a sense of community.”

Hearing from the players

We caught up with some of the academy’s players, Silvia Otokhagua and Alex Torres, to discover what inspires them and delve into their passion for basketball.

What do you enjoy most about being part of the college’s basketball team?

Silvia: “The people! I’ve met many lovely team members who are constantly wanting to improve.”

Alex: “The best part for me is the fact that all of my teammates have a part of their game which is better than mine. This means that when I train with them, I’m always improving my own game.” 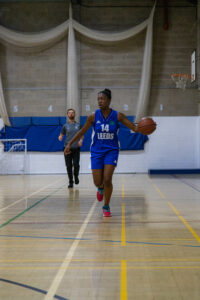 Why do you feel it’s important for more women to get involved in basketball?

Silvia: “When I came to England, it was really easy for my brother to find a basketball team, however I struggled to find a women’s team. It’s vital that we encourage more women into basketball, giving them opportunities to get involved and discover such an exciting sport.”

How has the Basketball Academy supported your journey into basketball?

Silvia: “They’re genuinely interested in what I want to achieve, and they help me reach these goals. The academy provides activities such as the 3v3 ball out, which allows me to improve my techniques.”

Alex: “Moving colleges for the Basketball Academy was the best decision I ever made. Not only have I improved as a player, I’ve also come a long way as a person, due to the fact that I gained a lot of confidence while playing in the academy.” 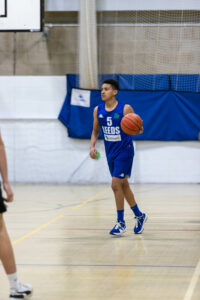 How do you balance your academic studies with basketball practice?

Silvia: “It’s all about managing your time properly. Training is actually a great way to relieve stress during busy academic periods.”

Alex: “Although the academy trains a lot, I still have time to complete my studies. My learning is currently going really well, and I’ve never been in a position where I feel like I’m doing too much.”

What advice would you give to someone wanting to pursue basketball?

Alex: “If you would like to pursue basketball, you should go for it even if you feel like it’s too late. It’s never too late as long as you put in the effort and set your goals.”

Many of the players give thanks to their coach, Norman Francis, who has 30 years experience of coaching national league level teams. A formal professional player, Coach Francis is committed to developing players on and off the court, while maintaining a keen eye for detail and understanding individuals’ roles when performing on the court. 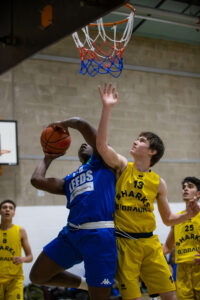