On 8 March, people all over the world come together to celebrate International Women’s Day. This day highlights the struggles of gender equality and brings people together to help diminish this.

It’s a chance to take action, and raise awareness of the economic, political and social achievements of women across the world.

What is the theme this year?

Bias and discrimination have been holding women back for centuries. This year’s official theme is #BreakTheBias, which looks at how we can collectively break the bias and misconceptions in the interest of creating a gender-equal and inclusive world.

You can get involved with the #BreakTheBias campaign by sending in photos of yourself with crossed arms as seen in the below image, or taking a selfie with one of the pledge cards, which you can download here to show your support.

As part of the celebration, we asked women leaders across the campus about who inspires them and why.

Who inspires you and why?

Andrea Cowans, Director of Student Life at the college, talks about Sally Kincaid, as an inspirational figure over the years.

“Every year I take a pause around International Women’s Day and reflect on some of the inspirational women I have met or heard about, and this year I found myself thinking about Sally Kincaid.

“I first met Sally around 30 years ago, when I was a student at (the now) Leeds Beckett University. We were involved in a range of campaigns and protests around social and political issues including anti-apartheid, student loans, the poll tax and fighting Clause 28.

“Sally is a key figure in campaigning for support for refugees, raising awareness, organising vigils and collecting and distributing clothing and resources. Sally has changed her life and that of others by fostering a young refugee and supporting him through his post-16 education journey at Leeds City College.

“Sally currently is in Calais, taking clothing, equipment and giving love and support to people living in the most desperate conditions.

“Sally remains an inspiration to me. I am in awe of her energy and commitment to changing the system that creates such unfairness. She gives me the confidence to make smaller and less noticeable changes in my own world.” 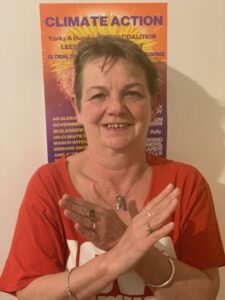 “I was one of only a couple of females in my year group at sixth form. This was at the height of Margaret Thatcher as our prime minister. Regardless of individual political opinions and drive, this woman was an inspiring leader. She did not come from the ‘Eton’ background with family connections, she pushed through her career as a politician. She was our first and only female prime minister at the time, she faced strong politically biased groups, such as the trade unions. She held firm in her beliefs and passion and maintained a persona of a controlled leader. 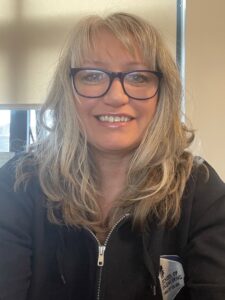 “She inspired me at a time when female equality was a battle; we were a generation who knew mothers and aunts who were denied rights of being able to have a mortgage in their name because they were female.

“The change in aspiration and acceptance of females in a leadership position cannot be underestimated both in this country and abroad from the battles that Margaret Thatcher fought behind closed doors.

“As I studied economics at university, she became an “ism”, Thatcherism. She had forged a unique identity and belief structure that had become a rare and everlasting economic theory, to be reviewed and analysed for years to come.

“She empowered me to believe that as a female, I could follow my aspirations and live to my maximum abilities. As a leader, I try, and hope, that I can support, inspire and encourage other females to achieve their maximum abilities too.”

Rowena Scott, Head of Applied Science at Leeds City College, talks about Ellen MacArthur and how she is an inspiration to her.

“My inspiration is Ellen MacArthur. After saving up her pocket money at a young age, she bought herself her first boat and this ultimately led to her breaking the world record for the fastest solo circumnavigation of the globe before the age of 30. It took her 71 days to do this in 2005, all alone, and with very few opportunities to rest or communicate with other people as the technology wasn’t always advanced enough for some of the remote locations she spent time in. I can’t imagine spending so much time alone with the added mental and physical difficulties of sailing a ship on top of that.

“Following her sailing career, she has built a non-profit foundation to look at how we can live and develop more sustainably. This is being achieved by looking at areas such as the regeneration of nature, eliminating waste and pollution and the reuse, repair and remanufacture of goods to reduce consumerism and the using up of finite resources. She also runs her own cancer charity called the Ellen MacArthur Cancer Trust. What a woman!”

Take a look at the International Women’s Day resources here.