Two of our Graphic Design students have been relishing the chance to work with a local musician.

Although his application was unsuccessful, the college offered Wilko some practical support. This included the use of the campus’ recording facilities and the opportunity to link up with students to support him in the creation of the artwork.

Wilko said: “I chatted with the team and it sounded like a really exciting opportunity for me to develop something in collaboration, to be able to give and receive feedback and learn about the processes behind designing visual merchandise.

“Initially I spent a day with around 30 students, talking to them about my journey and who I am as an artist.

“Caleb and Maria’s vision really stood out to me as it told a story, and represented the dark and light themes I explore in my music.”For Caleb, getting involved with this project meant gaining some valuable industry experience. 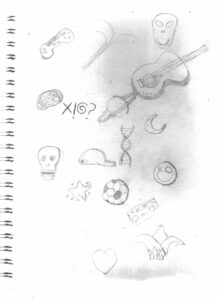 He said: “Doing graphic design for the arts and musical artists is definitely something I want to pursue in the future, and I thought the project was a great way of getting experience in this field.

“We took some time to sit down and discuss Wilko’s music and its themes. We also discussed the overall look he was going for and what it meant to him.

“From there, it was about playing with the ideas he gave me, which was the most fun part.”

The fund supports artists working across the full spectrum of disciplines with both financial assistance and practical support. By forging creative partnerships, the scheme aims to highlight the importance of cross-discipline collaboration in the creative sector. 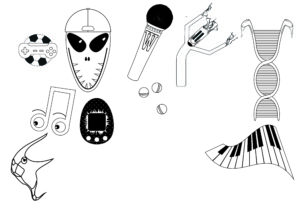 Commenting on the importance of graphic design in the music industry, Wilko added: “As an independent musician and creator, I’m often having to inadvertently design things, such as banners for social media or thumbnails for music videos, and it’s never been my strong point.

“It can be off-putting and time-consuming if you’re not naturally graphically-minded, so having designers on your team can be invaluable.

“I enjoyed working with the next generation of designers and want to send my sincere thanks and best wishes for the future to every student who participated.”

The album, Life Is Not A Rehearsal, will be released on 24 September.

What a morning! Even though we couldn’t invite

Join us at Deacon House Campus this December for a

Over the last three years and with the rising cost

Would you enjoy a behind-the-scenes tour of our Te