October is Black History Month, an annual celebration used to remember the achievements and struggles of black people across the globe.

The campaign originated in the United States more than 40 years ago, but is now recognised in multiple countries across Europe and North America, including here in the UK.

This year’s theme is ‘Time for Change: Action Not Words’ and over the past month, staff and students at Leeds City College have been learning more about black history and culture, whilst finding ways in which we can be active in tackling racism and discrimination.

Throughout the month, Luminate Education Group, of which Leeds City College is a member, has been running a video series entitled ‘Heard’.

The series aims to shine a light on the lives of our staff members from the black community, to celebrate the valuable work they do and their achievements both professionally and personally.

The interviews also gave the members of staff an opportunity to discuss what they thought could still be done to ensure our campuses are inclusive places for BME individuals to learn and work. 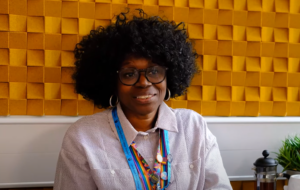 Jenny said, “I want to work towards a world where equal opportunity happens for everybody.

“It shouldn’t be a fact that some people have to work twice as hard to get to where they want to be, or shout the loudest to be heard.

“Life comes with different experiences, and it’s important that those from minority backgrounds have a platform to share them.”

Students were fortunate enough to hear some of the experiences of local success stories at a Black History Month panel, which included former Leeds United footballer Sanchez Payne and singer Melissa Steel.

The panel focused on various topics including the influence of the black community on music and popular culture and the pros and cons of social media. 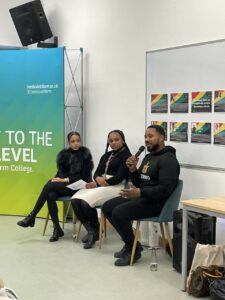 Speaking on the Black History Month panel, Melissa said, “The influence of the black community on popular culture is endless.

“Often the achievements of black individuals are downplayed, so it is important to recognise black excellence and honour the contributions of the black community to our everyday lives.”

Throughout the month, our students have been learning about aspects of black culture in an effort to overcome cultural barriers by interacting with the experiences of people from different backgrounds.

Later in the month, activist Max Farrar came to talk to students about David Oluwale’s story and how it’s changed policies in Leeds, 53 years after David’s death.

Max’s presentation centred around the topics of racism, police brutality, homelessness and mental health, and explained why it is important to have continued conversations about past events to inspire current and future social change. 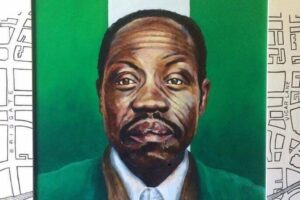 Music students at Quarry Hill spent some time learning about the origins of reggae music and its influence on today’s R&B and ska music genres.

The students also explored the more technical musical features of reggae, before trying their hand at covering a modern reggae song by the artist Eek-A-Mouse.

Meanwhile over in the canteen at Park Lane, students were able to sample some traditional soul food recipes from across the black diaspora, including malay chicken curry and traditional Nigerian jollof.

Campaigning for a more inclusive world

Black History Month is not only an opportunity to celebrate the achievements and cultural contributions of the black community, but also to reflect on what we call all do to tackle the problems they face. 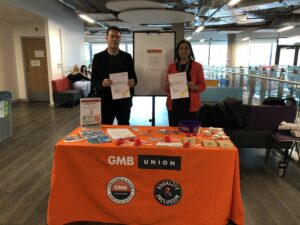 Bill commented, “as part of Hate Crime Awareness Week, we need to make sure staff and students are aware of it, so that hate crimes are reported, dealt with and we can stamp out this insidious development of increased hate crimes in the country.”

Alongside this, a number of ‘Show Racism the Red Card’ sessions were held at our Printworks campus and students had the opportunity to hear from a member of West Yorkshire Police about how they can help to challenge, report and stop hate crimes.

Looking to the future

As we come to the end of October, it’s important to reflect on all we have learnt throughout Black History Month and to use this knowledge as a catalyst for change in our everyday lives.

To quote civil rights activist Harriet Tubman, “you have within you the strength, the patience and the passion to reach for the stars and change the world.”