A celebrated local photographer has raised money for homeless charity, St George’s Crypt, with an exhibition at BLANK_ documenting homeless people of Leeds from yesteryear.

Former Leeds College of Art student and now renowned photographer, Peter Lavery, dipped into his archives to unearth a powerful series of black and white photographs of homeless people, taken in Leeds in 1968.

The Summer of 68 photography project was in collaboration with St George’s Crypt to celebrate their 90th anniversary. It was brought to life here at BLANK_ gallery, our city centre event space dedicated to showcasing new contemporary creative practice in Leeds.

Peter Lavery explains: “In the summer of 1968, I went out every night for two weeks with my camera and recorded homeless people who relied upon St George’s Crypt for food and shelter. I found the photos in storage during lockdown.”

Lavery’s nightly excursions resulted in a set of photographs using just four rolls of film, which had, until now, never been printed or published. He continues. “I’ve loved making them public and seeing the reaction to the docu-series, and raising awareness that some of the same issues for homeless people sadly still exist, 50 years on. The team at St George’s Crypt work incredibly hard to change the fortunes of their clients.”

180 people attended the exhibition evening at BLANK_ at Quarry Hill. They included the Archbishop of York and leader of Leeds City Council, James Lewis. Food was provided by Leeds City College’s School of Food & Drink, with guests served by our hospitality students. The event was supported by Peter and Kimberly Lavery, St George’s Crypt, BLANK_ , Leeds Inspired, Malmaison, Pete Denton and Made by Team.

St George’s Crypt has been supporting homeless and vulnerable adults in Leeds since the 1930s. It supports people from the street back to independence, working with people with alcohol dependency, mental and physical health needs. It works with partners across Leeds to support homeless people to establish strong, positive foundations, develop life skills and ultimately, move into safe and thriving communities.

Peter Lavery is well known for his narrative work and acclaimed advertising photography, and for his photographs documenting circus performers around Britain. He was born in Wakefield in 1948 and studied at Leeds College of Art in the 1960s. He became a professional photographer in 1972 after gaining an MA from the Royal College of Art. 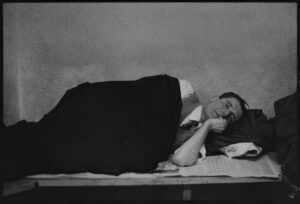 What a morning! Even though we couldn’t invite

Join us at Deacon House Campus this December for a

Over the last three years and with the rising cost

Would you enjoy a behind-the-scenes tour of our Te