Relocating to a new country without knowing the language can be an intimidating prospect. Public Services student, Shamza Butt, faced many challenges when moving from Italy to the UK at the age of 14.

Not only did she have to learn a new language, but also had to integrate into an entirely different culture.

Her passion for community work has been recognised on a local and national scale, with the Prime Minister giving his personal thanks for her dedication to social projects.

Shamza grew up in northern Italy within a low populated, tight-knit community. Through her upbringing, she appreciated the importance of a close community and was keen to bring this sense of togetherness to Bradford.

“Once settled in the UK, I joined the National Citizen Service (NCS) through the Bradford Community Foundation. The NCS has changed me as a person; it has allowed me to become independent while also learning how to work in teams and make friends. I’ve learnt so many fantastic skills, such as public speaking and CPR training.

“Participating in the NCS helps the community in so many ways. I was recently involved in a social action project to benefit the community, where we worked on an inspiring mural in Bradford to celebrate the diversity of the area. We also used this mural to thank all of the key workers who have worked tirelessly throughout the pandemic.

“Through the mural, our project group was able to showcase how joyful and accepting the  community is. Due to my efforts as part of the project, I was invited to meet the Prime Minister at 10 Downing Street so he could thank me for making a difference within the local area. We spoke in depth about my future plans, and I mentioned how I wanted to serve my community by becoming a police officer.”

Sights set on joining the police

The HMPnotforME workshop gave Shamza a taste of police work, which was the turning point in deciding which career path she’d like to follow.

“I’m currently studying Public Services Level 3 at Leeds City College, where I’ve learnt about the different organisations within government and how public services are affected by them, laws around diversity and inclusivity and leadership styles.

“When moving to the UK, I often felt like a missing puzzle piece as I was constantly trying to find ways to fit in. However, I’ve been overwhelmed at how welcoming the college is – they provide incredible academic and wellbeing support.

“There is a real team spirit; we are encouraged to work together and make connections with everyone on the programme, which will really reflect life as a police officer.”

Thinking about the future

Currently in the application process, Shamza is hoping to secure an apprenticeship with West Yorkshire Police.

“I’m now working as the first peer researcher from Bradford with the Peer Action Collective programme as part of the Bradford City Community Foundation.

“My role is to collect data on a bullying project, where I contact local schools and speak to young people about their thoughts. I’m committed to helping minimise youth crime, which I hope can be done through encouraging teens to get involved in the community and provide additional support for their needs.

“I have also recently the #iwill Fund youth advisory board, where I will be working with the National Lottery Community Fund on various social action projects.”

Have a read of the Public Services courses here. 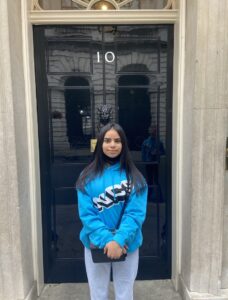