The online show, which invites panellists from diverse backgrounds to discuss a range of topics, is the brainchild of Health and Social Care student, Kamaar Brown and aspiring actor and previous student, Solomon Gordon. 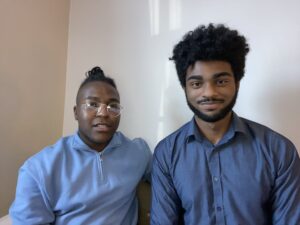 Inspired by the original ‘Loose Women’, a television show where celebrity women speak about contemporary issues, these business-minded students saw a gap in the market for young male-led opinions.

Kamaar commented: “We decided to set up Loose Mandem to give a voice to young people from a range of backgrounds and ethnicities; we pride ourselves on inclusivity and want to encourage fair debates. Solomon and I are both black, British-born Jamaicans, and we’re committed to ensuring people from all races are heard on our show and feel fully represented.

“Unlike Loose Women, we wanted to change the narrative so that young people could engage in discussions on issues such as politics, current affairs, real life dilemmas, mental health and latest news stories.

“Our show champions free speech, where panellists and viewers can have open discussions to discover the many sides of different debates. The key aim of the show is to encourage young males to not be afraid to speak up and let their voices be heard on important issues; we want to give ordinary people a platform to express themselves and shed light on different perspectives of the world.”

Loose Mandem has gained positive feedback from listeners, with many commenting on how refreshing it is to hear the honest opinions of young people in today’s society. Kamaar and Solomon have also received well wishes from two of Loose Women’s hosts, Coleen Nolan and Brenda Edwards.

“Despite some initial issues such as video quality, we’ve now filmed 22 episodes for our first season, and have begun filming for our second series, where we will be interviewing local and well-known individuals.

“Our dream is to one day appear on mainstream television so that we can be heard by global viewers. From an academic perspective, I’m working towards becoming a primary school teacher, so that I can inspire the next generation of young people. Solomon is now studying acting at Leeds Conservatoire, and hopes to work abroad in the coming years.”

One of the many benefits of becoming an apprentice

This Friday we will be holding a Wellbeing Day, wi

It's National Apprenticeship Week! If you're an ap

Are you visiting our campuses at today’s open da

Happy 1st of December! 🎉 This month is all abo

*Important Information* In light of the announcem

We hope everyone had a great kickstart to November

Course perks! 🎨 One of many skills that our @l