With the Brexit deadline looming, and businesses, investors and workers in the UK increasingly becoming perturbed with what the country will look like after the dust settles from the UK’s final separation from the EU, one sector often overlooked has turned the negative into a positive, with a group of students taking on the challenge and interpreting their understanding of Brexit, through art.

Several art students from Leeds City College, who were too young to vote during the referendum in 2016,compiled a collection of artwork depicting their thoughts on Brexit. 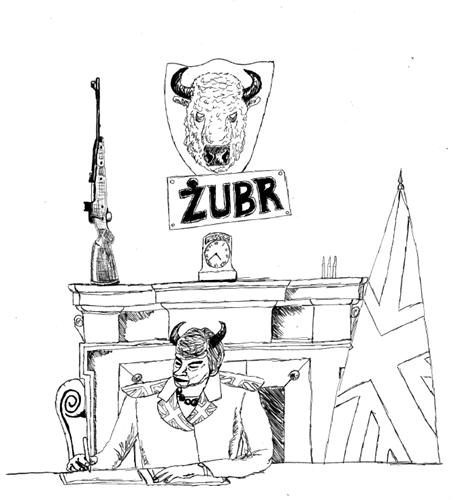 Predominantly a group of ‘remainers’, the students, who may not have understood how this political decision would affect them, also produced a number of art pieces that are open for interpretation and include paintings, printmaking, illustration and installation.

The exhibition, titled Article 50, took place from 29 March at the Brunswick on North Street and ran until 3 April 2019. Nestled in the heart of Leeds, the traditional pub is a contemporary, artsy space, with hearty dining and lively entertainment.

“In the image, is Mrs May signing the clause and behind her, is a hunting prize shield which proudly displays the head of a buffalo. The buffalo is representative of a Polish import product, Zubr, which is emblazoned below the head. It serves as a metaphor for trade deals with countries within the E.U.

“On the mantelpiece is a hunting rifle, in plain view, suggesting May has just claimed her “trophy” and has nothing to hide,” Mr Johnson added.

The arts and culture industry is a significant player in the UK and the sector contributes £7.7 billion annually to the economy it has been estimated.