The School of Land & Animal Sciences at Leeds City College has been showcasing some of its invertebrates to visitors of Temple Newsam House.

The team, including a group of volunteering students, delivered exciting talks to guests and displayed a range of pest species. We caught up with Jane Colley, Teacher of Land & Animal Sciences at Leeds City College to tell us more about the event and the courses. 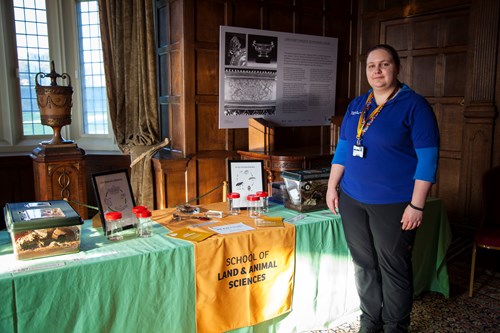 What has stood out for you at the event?

Seeing people’s reactions to the animals. You might think the children would prefer handling the invertebrates but you tend to find that actually the children don’t and it’s the adults who really enjoy it.

Give us a fact about one of the invertebrates.

Snails are hermaphrodites which means they can self-fertilise. People might get one snail and think that they’re not going to get baby snails and they do.

What can students expect on the courses?

The courses that we’re running are very practical; students get to do a lot of animal handling, cleaning the enclosures and feeding the animals.

We have a range of reptiles, amphibians, invertebrates and small mammals. Learners get to work on the farms as well, where we have access to sheep, cattle, goats, chickens, rabbits and guinea pigs.

What attracts students to this course?

Most of them just really enjoy animals. A lot of them have pets at home, some of them might just have a dog but some have a whole range of animals, possibly more than us.

Some students just really want to work outdoors and they find that working with animals focuses their interest in maybe farming or working in a zoo. It’s very rare for us to get students who have never worked with animals before.

It is nice that students tend to have different interests. Some will refuse to touch a snake. Some of them don’t like rats or invertebrates so it’s nice to see their reactions change over time. We had one learner who started with us in September who wasn’t really sure about rats and has since handled them and grown to love them.

What do you think students get out of studying here?

Students not only get to work in the classroom with some of the smaller animals but they get to work with the larger livestock in a real setting.