Student and refugee set for a bright future in acting

Student and refugee who won his asylum appeal in December is set to appear in the Leeds Playhouse production of Hamlet.

Hossein Ahmadi feared he would be executed or imprisoned if he returned to Iran, after the Home Office rejected his application for asylum last November. 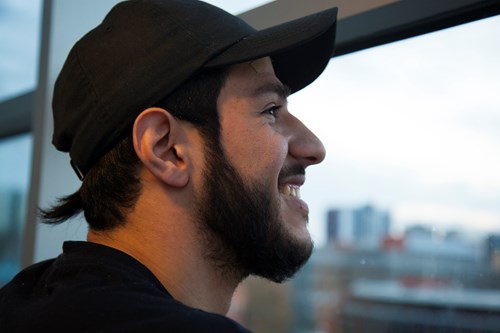 He lived in the Dunkirk refugee camp for nearly 11 months, where he survived harsh and frightening conditions, including many arrests and beatings from both police and smugglers. He was eventually able to gain access to a refrigerated lorry bound for England, and made the gruelling journey in -20 degree temperatures.

His tutors set up a petition where he received over 9,000 signatures, which played a part in his successful appeal.

Hossein is now enjoying life in Leeds with his foster parents and friends at college, where he is immersing himself in acting projects.

The 17 year old said: “I was overwhelmed with the support I received and I’m so grateful for the positive outcome. I can now sleep soundly and focus on my passion of performing.

“As well as rehearsing for Hamlet, I will also be taking part in an acting workshop in London which is really exciting. I’m looking forward to my future and hope to feature in TV shows and films.

“One day, I hope my mum will see me on TV and make contact with me, as I have no idea whether she is still alive.”

Hossein will be playing the role of a soldier in the upcoming production of Hamlet, which will be taking place from 1 to 30 March.