Leeds City College’s basketball team has gone from grass-roots to winning the regional Association of Colleges (AoC) league in the space of just over two years.

The diversity of players represents over 10 different nationalities, including a Turks and Caicos business student and captain, who was nationally recognised as ‘Performer of the Year’.  We caught up with Leeds City College’s Sport Activities Officer, Loran Lewis, who’s behind the success of the basketball team. 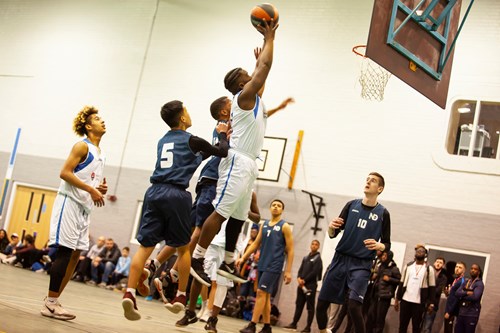 What made you start a basketball team?

Leeds is a huge basketball city, yet its biggest college did not have a basketball team! We started after I realised there was a great demand for a competitive team, especially from our international students. Our coach Norman Francis had been coaching community basketball in Leeds for over 35 years and I believe we were not utilising his vast knowledge and expertise of the game to its full capacity.

The growth has been tremendous. We have gone from getting a few people at a recreational session once a week, to having a title winning team who have provided the foundations for the 2019/20 Basketball Academy. This success is primarily down to the dedication of the players and continuous support from coaches, Norman Francis and Will Hopper, and the wider student engagement team. Our focus now is to expand the women’s basketball offer and get more of our female students playing the game.

What has it achieved?

It has given students an alternative to the competitive rugby and football offers that are already available at the college. We have engaged over 120 students in basketball over the last three years, with around a quarter of this number representing the college in some capacity with the basketball team. The men’s team won the AOC regional league in their first year in the competition whilst we have also entered our women’s team into their first AOC tournament.

Off the court, the Basketball Society, made up of college players and basketball enthusiasts, have raised £200 for an anti-bullying charity, been invited as guests to Sheffield Sharks and Bradford Dragons basketball games, and run activities during lunchtimes to get more people involved in basketball at the college.

The captain of the men’s team, Randy Jean-Guy, has since gone on to win the AOC Sport Student Performer of the Year Award, a prestigious national award given to the student who has excelled and achieved the most in college sport during the academic year.

What are the benefits of students playing basketball?

Basketball is one of the most inclusive team sports in the country, it is the second most popular sport in the world and second most played sport behind football for pre-college age students.  It is great for your overall fitness and endurance and helps participants build essential skills such as communication, teamwork and discipline. The end-to-end nature of basketball means that there are plenty of opportunities to score; never will you see a basketball game end 0-0!

What is next for the team?

The Basketball Academy starts next year, and will give students the opportunity to enjoy a structured training regime and weekly fixtures alongside their studies. Some of the players from the team are now volunteering as coaches for my community basketball project outside of the college and passing on their skills to the next generation. For the players who have finished their course, I am sure they will be keeping a watchful eye on how the team are doing next year. As defending champions, the pressure will be on but I am sure they are up to the task!