For International Women’s Day we caught up with Project Lead for Games, Fee Laming, and Level 3 Extended Diploma in Games Design student, Katherine Jackson, to discuss the proportion of female developers in the games industry.

According to The Telegraph, the UK games industry is worth nearly £3bn and employs more than 47,000 people across the country. With a nation of a reported 37m gamers, a record £5.11bn was spent on gaming in the country last year. 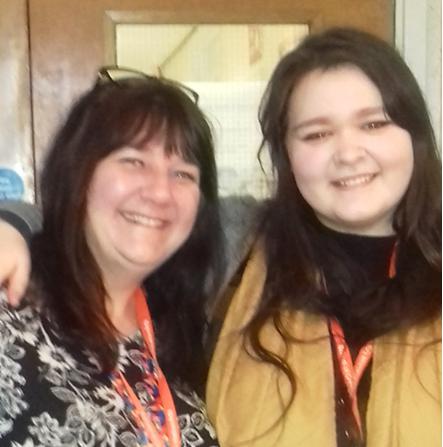 The gaming industry is thriving with more games and developers joining the ranks each year. But, of the masses of developers that are contributing to such a fast-paced market, only an estimated 22% of them are women.

So, what is it exactly that prevents women from joining such an exciting network of innovators?

Fee Laming has gained more than 20 years as a developer. As the Project Lead for Games at Leeds City College, she is responsible for researching and implementing an education programme for students, staff, wider educational institutions, and the industry on the low representation of females in the games industry.

She says: “The representation of women in the games industry is getting better, we’re at about 22% now. It’s a lot better than when I started. The biggest issue at the moment is that we can’t hire people who don’t apply for the jobs.

“A lot of female students aren’t considering games as a career and because it’s a fusion of science, maths and art, they’re not going through the proper training. We need to get them into training to then be able to hire them.”

Developers regardless of gender
Though Fee has experienced some gender discrimination in the past, she explains that the industry as a whole isn’t as prejudiced as it’s positioned in the media. Instead, there’s a level of unintentional misconceptions which can then be over-exaggerated by games journalists.

“Quite often I’ll go out and I’ll be with 30 guys and I’ll be the only female, but I never see it like that. I just see that we’re all developers, and so do they.

“It’s not malicious, it’s just a lack of awareness…I look after 800 of the local developers, the majority are men, and that’s not the way they think. It’s a lack of knowing how to act around females, it’s the lack of knowing that as sexes we do think very differently,” Fee explains.

Once it’s understood that the industry isn’t as divided as it may be portrayed, it becomes a more complex subject as to why women aren’t pursuing games development as a career.

“It’s systemic, I’ve been researching a lot into female psychology and we females need to feel like we’re doing something useful in society. Games traditionally are portrayed as frivolous fun things that you do in your spare time. We don’t just make those types of games, we make educational games, training games, and simulators for pilots and surgeons.”

And that’s where Fee comes in. After working in the industry herself, she’s now on a mission to inform female students that games development is a viable career and to dispel any misconceptions about what the games industry is like. Her support for her students extends beyond further education to their careers.

I’ll be there for you
“It’s not just here, I will see Katherine when she goes to university, I’ll make sure I know where she’s applying for when she goes for a job, and I will always be there for her to ring me, even when she’s in the industry.

“I’m here for my industry and I don’t want any of my girls going through the same experiences I’ve had to endure. I want to change it and I want to change it before I retire. It’s important for Katherine’s generation and the generations that come after her, because if we don’t change it, I don’t think anyone is going to.”

Though it may seem like Fee is fighting an uphill battle, the industry is willing to change. She’s already noticed that men are becoming more sensitive, females are now referred to as women not girls, and she is mostly seen as a developer, not a female developer. Leeds City College is on-board too.

She says: “The college needs to see the bigger picture and they do, and they’ve been brilliant. The games department is definitely taking it on board. They’ve listened to what I’ve had to say and where possible they have made changes, every single one.

“I’m taking all of the girls to Brighton for a conference, for free, for them, and they’re having coding lessons with a female programmer. It’s to give the girls those role models, so they think ‘I can do this, those women have, why can’t I?’. I’ve been helping students decide which universities to apply to and more people need to be doing that.

“Everywhere we go we have gender discrimination. Every day.”

Breaking up the boys’ club
Sadly, intentional or not, the discrimination is not exclusive to Fee. Katherine Jackson, a Level 3 Extended Diploma in Games Design student, has also experienced stereotyping:

“For me and my school, science, maths, and computer science were never an option. It was for the ‘nerdy boys’ and we weren’t encouraged. I was asked if I’d rather do art or English. When I wanted to apply to the main sciences, I was put on a watered-down programme.

“It’s like a boys’ club. Nobody was encouraging me to go for science and maths subjects. Even when I considered studying law and psychology, I was asked if I’d prefer to study something like art, like they were saying it’s a bit too academic for you,” explains Katherine.

The discrimination combined with the secrecy of the games industry made it difficult for Katherine to truly anticipate what the industry was like. Luckily, the support she’s received from her college tutors and Fee have provided her with insight and improved her confidence:

“I didn’t really know much about the games industry, everything I knew was from being a consumer, or games journalist, or people with YouTube channels…Now I feel like I know a lot more, I feel a lot more optimistic as well,” Katherine says.

““My tutors are quite good, they’re mostly male but they’re very aware and they are self-reflective of what they’re doing…My confidence has exploded because I was shy and I couldn’t talk and now they can’t shut me up. I can do it and I believe in it,” she adds.

Every aspect of the female students’ feelings and concerns is taken into account both by the college and Fee:

“Rather than isolating girls we keep them together, having more girls in the class gives them the confidence to do this. I meet with them every week so if there’s problems they can discuss them with me,” Fee explains.

A student set for success
Despite difficulties with gaining the support for her studies, Katherine is a shining example of talent that the games industry almost missed out on. She’s just received an offer from Bolton University, and already knows that she wants to specialise in 3D modelling:

“When I was submitting applications, a lot of universities were saying you need to use 3D software. I felt confident because of the skills I’d been taught here in the two-year course, were skills universities were looking for and were surprised I already had.

“I feel ready for university. I was telling my tutors for the universities that I’ve been to, we [the Leeds City College students] have more of a head start. What we’re learning right now wouldn’t get touched upon until first year of university.

“With university, I’m sure Fee will be there but I don’t know if I’ll have the same support, I’ll be sad to leave college. Fee has definitely helped us develop more skills such as coding so it’s been great to have that and the talks with people in the industry to inspire us. Her passion is everything, she’s only been here eight months, but she’s done it,” Katherine adds.

The future is female
Now that Katherine has unlocked the skills to program in her profession, she’s set her sights even higher, she wants to give back and support the next generation:

“I’d like to develop skills in a lot of women, I’d want to be in the industry a while first but then I’d like to go to universities and help teach so it’s on my radar. I think we all help each other out and I do feel passionate about getting more females into the industry.

“It’s important to get more women in the industry as we will have a different perspective and different things to contribute. We all have different stories to tell and I think the industry is changing. There’s more females that have enrolled on my course the year after me, so it’s starting already.”

Regardless of how much the games industry may change over the next few years, one thing is for sure – these two developers are already serving as role models for future generations and their aims will undoubtedly be achieved.