Hard work and perseverance pays off for acting student

Former acting student, Beccie Allen, tells us about her time at college and how she reached her goal of going to drama school.

How was your time at college?

My time at college flew by, it was over before I knew it! It was a really enjoyable environment. Tutors really challenged us with the breadth of styles of theatre they introduced to us and really pushed us practically in workshops. 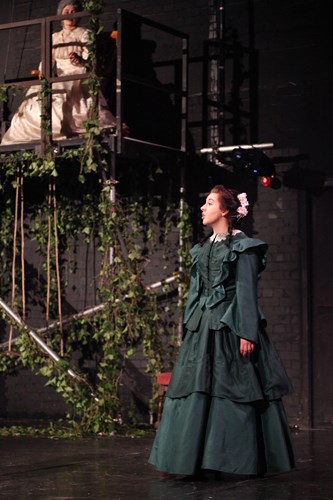 What did you enjoy about the course?

Teachers treated us like we were at drama school so that we knew what to expect if we chose to go to one. It gave us a taste of the hard work needed to put into any acting work we wanted to pursue.

We had the chance to see two shows a year at Leeds Playhouse and we were always informed about opportunities to get involved in performances within the college and externally. I remember going down to the Olympia in London for some workshops with industry professionals which was really insightful.

What are your highlights?

Some of the many highlights include putting on our own children’s educational play in the style of ‘Horrible Histories’ and taking it to a local primary school to perform, creating a physical theatre piece to Pink Floyd’s ‘The Wall’ album, and our final project where we staged Great Expectations and had full period hair, makeup and costumes thanks to a collaboration with the Theatre Design and Production students.

What did you do when you left college?

I intended to go straight to drama school like some of my classmates. I remember waiting to see if I was awarded a place at the Bristol Old Vic Theatre School, but I didn’t make the final class which at the time was absolutely gutting. But I dusted myself off, worked in retail for the following year and focused on auditioning again for the next year.

This turned into a similar pattern for the next three years of my life. I auditioned every year and didn’t get places at any of the schools I had been applying for; some years I was close again to getting a place, and other years I was not.

In-between auditioning, I had different jobs in the retail, bar, hospitality, admin and performance industries. I enrolled on a course and became a member of the National Youth Theatre, where I was involved in local acting workshops and plays.

I had a break from it all in 2016 and went travelling around India and South East Asia for four months and then came home to try auditioning again. I also did a free writing course called New Views and wrote my first short play. I did anything I could to keep my creativity flowing alongside working.

What are you doing now?

I currently work as an actor at The York Dungeons and will soon be moving to Liverpool to start my next chapter as I finally got into drama school. I will be studying acting at the Liverpool Institute of Performing Arts.

What advice would you give to students?

I think that it is important for all students to know that if it doesn’t work out the way you wanted it to, don’t give up! It isn’t the end of the world and everything works out for a reason.

Pick yourself up, dust yourself down and go again. Do not let anyone tell you that you can’t, because if you really want something, you will find your way to achieving it even if it isn’t through the traditional route you thought you needed to get there. If you really want it, you have to prepare to work hard and put the time in, nothing will happen if you rest on your laurels and wait for it to fall on your lap.