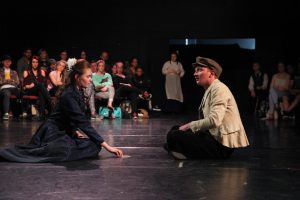 Jake rose is an aspiring actor who attended Leeds City College (LCC) and left the UK to study at the American Academy of Dramatic Arts (AADA) while living in New York.

Since graduating, he has played Shakespeare and has been favourably reviewed in reputable newspapers. Below is his interview with journalism student, Levi Gardner.

How would you describe your time at LCC? How did it help you to get to where you are now?

I have the fondest memories of my time at LCC and without the guidance of the staff and encouragement of my fellow actors, I would not be here now in New York following my dream. LCC was the foundation that inspired me to see acting as a career and not simply as an enjoyable hobby.

What was life in New York like for you to begin with? How did you raise funds to travel there?

Hailing from a small town near Bradford, the big city life of New York was quite an eye opener for me. I have to say it was slightly daunting in the beginning being that far away from home but at the same time so exciting!

Adapting to a new, fast paced way of life took a few months but I soon settled into the swing of things. Initially I delayed taking up my place at the American Academy to work full-time and save money. I was able to take out a career development loan from the bank and with a little help from family and friends, I was eventually on my way.

Why did you choose to study in America rather than the UK?

I never made a conscious decision to study in America, it happened by chance really. After finishing at LCC, I spotted an ad for the Summer Camp programme offered by the AADA. Using my savings, I went over to New York and enrolled. I fell in love with the city and the school, met some fantastic like-minded people and auditioned for a full-time place. Little did I know that I would still be here after nearly four years.

I auditioned for some schools and universities in the UK whilst still at LCC however the overwhelming feedback I received was that I didn’t have enough experience and at 17, I didn’t really understand what they meant by that. Looking back now, I can certainly see the point they were making. Having gained all sorts of experience in the following years, both in acting and in general, I feel I am more able to express myself and use the knowledge I have gained to develop my career.

Could you tell me your how your time at the AADA was? How important was it as a foundational stage of your career?

My time at AADA has been the most rich experience for me, studying acting there has meant I have encountered both the weird and wonderful. It was a turning point for both my career and my personal life. Being consistently pushed out of your comfort zone and pressed for real emotion was unbelievably challenging and exhausting and there were times when I questioned whether acting was for me.

I had always felt that acting came naturally to me and I had relied on this ability to carry me through, but AADA change my perception of the world of acting and I realised you had to work extremely hard to achieve your goals in such a competitive area.

The whole experience has been hugely important in that it has propelled me into the real world of a working actor. I have made some fantastic connections within the business, gaining exciting opportunities and meeting some great lifelong friends who are mutually supportive of each other.

Are there any moments from your studies at the American Academy of Dramatic Arts that you are proud of or look back on with nostalgia?

In acting, there can be real highs as well as some lows. One of my biggest highs was being given the opportunity to play Romeo in Shakespeare’s Romeo and Juliet. Shakespeare had not really interested me that much before this, it was to be the opening show for me at AADA and the general public were invited. Undertaking the pivotal role of Romeo after only a few Shakespeare training classes was very challenging. There are preconceived ideas of how Romeo should be, and developing my own portrayal of him was thrilling and is still one of the most rewarding things I have done.

What were the first plays you performed in, how were the reviews?

I left AADA last March and since then I have been involved in other projects. ‘The Land of Promise’, a play about the Ulster Scots and their experiences and influence in America provided my first opportunity to perform. It gave me a huge buzz when my photograph alongside a very favourable review appeared in the Irish Echo newspaper, one of the most well-known and oldest Irish American papers in the US. This particular play is going on tour around America later in the year.

My next project was ‘Hamlet’, playing both the role of Laertes and Guildenstern. This proved to be another of the most challenging and rewarding roles I have undertaken so far. One review said: “Jake Rose and Alexia Hartman. Rose played both parts of Guildenstern and Laertes opposite Hartman’s Rosencrantz and Ophelia. The two expertly shifted from siblings to the comedic duo seamlessly, so clearly and effectively, that should they have not changed costume at all, you would still be able to identify exactly which character they were playing”.

Moving on from this, I performed in a play called ‘Next Round’ based in a pub in the north of England, this was a comedic role and was highly enjoyable, it will be coming to Scotland later this year as part of the Edinburgh Fringe Festival. There are lots of other plans afoot to perform with our newly formed theatre company too.

What do you hope will come out of your new theatre company?

Our company Giggleriot Theatre was created by a small group of actors from a need to perform and maintain momentum in between other projects. The nature of the life of an actor can mean that you have periods when you are not working and developing our own company is the perfect platform to create different opportunities to act.

Following our first successful production, performed in New York, we are planning lots of other exciting things. We would love to take our company into Europe or back to England, we are a very international cast.

What is your ambition for the future?

My immediate ambition is to be able to work as an actor and earn enough to pay all the bills. I would love to perform more Shakespeare but would welcome any opportunities in any genre really.

Is there anything else you’d like to tell us about your career so far?

In some ways I wouldn’t consider what I’ve done so far as a career. I am really proud of my achievements since my time at LCC but there is so much more to do. If I can keep pursuing my love of acting then I will truly be living the dream!

Jake Rose was a pleasure to interview, his future is truly bright and with reason aplenty. His enthusiasm is refreshing, his passion palpable.