College ‘sweethearts’ get ready to tie the knot

They are now a dream team but, little did they know that while pursuing their goals at college, their paths would cross and that they would graduate, and start building a life together.

Anthony Bartholomew and Eve Raven met in their first year on the LLB course. They were both on their way to the library for a tour when they encountered each other. 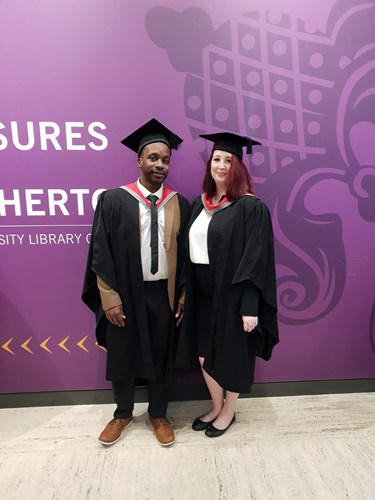 Eve was running late that day and going in the wrong direction, when Anthony stopped her dead in her tracks and told her.

“We met on the third floor staircase on a group tour and he said to me, ‘we’re going this way love’.

“I think it was his trusting eyes and his cheeky smile that made me turn around and follow him, she added.”

Anthony said it was his first time to see her that day, as he had missed induction. Nonetheless, that the chance meeting was the beginning of their journey.

“I remember that day clearly. I was on my way down with the rest of the class to go for a tour in the library. I signalled Eve and told her that she was going in the opposite direction and well, the rest is history,” Anthony said.

Anthony studied law at Leeds City College before going on to the University Centre to continue with his studies. He said he pursued law because he wanted to make a difference.

“My interest in law started from a very young age. More so because a friend of mine was sent to prison for a crime he did not commit. Luckily, he was released after another lawyer took on his case and appealed the verdict.

“I think this only solidified my decision to pursue law as a viable career. The more I understood and experienced the subject, the more passionate l became about it,” he added.

Eve, who has now been at the college for five years, began her college journey at 17 and studied A level psychology, sociology and law, but did not continue after her first year due to personal circumstances.

She said after she had her first child, she knew she didn’t want to sit at home and do nothing and looked into continuing with her education.

“I needed something more and I wanted to do something that would lead to a career. So after the birth of my son, I secured a place at the University Centre – first, doing my access course in law and then continued on to the LLB degree.”

The couple graduated last November and in between Eve pursuing a PCGE and Anthony working as a legal assistant and doing his LPC and Masters in Law and Business, they are expecting their first child together and planning their wedding.

“It was awesome to graduate together, I really enjoyed standing up there and receiving my certificate. More importantly, being able to watch my partner graduate at the same time, filled me with pride.

“It is not a day I’m likely to forget because following the ceremony, Anthony proposed in front of some of our family and friends,” said Eve.

Anthony added, “It was great to have that sense of achievement, not only for myself, but also for my significant other. It is a day we will both remember.”

The nuptials have been put on hold until Eve gives birth later this year.