A student’s act of kindness helps the homeless in Leeds 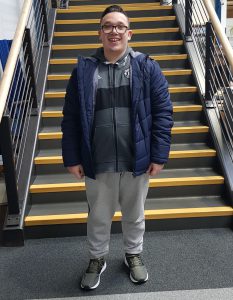 His acts of kindness are making a difference in the community and bringing hope to a world that is often filled with sadness and negativity.

Taylor Butler, who is studying a Level 1 in hospitality and catering at Leeds City College regularly gives away any pastry and sweet treats he makes at college to the homeless.

Taylor, who has a visual and hearing impairment, once dreamed of becoming a driver for Eddie Stobart, but now, he has set his sights on becoming a pastry chef and is hoping to progress on to a pastry course next year.

After completing his Entry 3 in hospitality last year, Taylor said it was an experience that taught him a lot about the industry.

“I found it easy – I learnt knife skills and how to set a table (working front of house). I cooked and cleaned the kitchen. I also helped out with the student shop on a Thursday during my lessons.”

Last Christmas, Taylor and his mother Felicity put together an innovative advent calendar to raise money to create small Christmas packages for those in need.

“We did a backwards advent calendar. We put money into the calendar every day and got our family to contribute. The aim of this was to help those less privileged over Christmas,” Taylor said.

“On Christmas Eve we went out and bought sleeping bags, gloves, hats, scarfs, socks and toiletries. We then made six parcels that we gave out to the homeless. We also made packed lunches and hot drinks,” he added.

Taylor and his mum also dropped food off at St George’s Crypt for those in need on Christmas Eve.

The Christmas parcel initiative started in 2017 in memory of Taylor’s stepdad’s friend, who was homeless and sadly passed away in one of the tunnels in Leeds.

In 2019, in conjunction with a family friend, they hosted a pensioners Christmas dinner where he worked in the kitchen.

“My mum’s friend owns a working man’s club and does a free Christmas dinner for all the local pensioners every year and I volunteered for that.”

He also volunteered in 2018 at a charity night hosted by his parents and a group of family friends, in honour of his stepdad’s friend who was diagnosed with terminal cancer. They raised £6,500 on the night and the proceeds went towards helping his family with funeral costs.

Throughout the year, Taylor completes a lot of charitable and unpaid work. He often helps his grandparents out by mowing their lawn and tidying up the garden. In addition, he tends his neighbour’s garden and washes cars.

Taylor also helps his mother on days when she is unwell. Felicity, who is currently waiting for spinal surgery, has days where she struggles to get out of bed. Taylor helps out around the house with hoovering and watching his sister and two brothers.

More than seven years ago, Taylor’s family were told that he would not have the ability to do some of the things that he is doing today because of his disability.

His mother had to fight for him to go to a mainstream school, as he was told he did not qualify. He eventually got a place at John Smeaton Academy despite concerns that he wouldn’t succeed. However, he enrolled in the complex needs department there and passed all his qualifications.

Unfortunately, Taylor did not qualify for the work placement initiative at school and was not invited to the formal assembly for the announcement.

His mother pushed for him to get a placement at a local nursery and through the school, they got the necessary insurance required for Taylor to complete his placement.

Felicity said: “One of our friends ran a nursery and I asked if we could do the work placement within her nursery and she said it was fine. I went back to the school and asked if they could sort out the insurance and gave them all the paperwork.

“If I had not pushed for Taylor to become part of some of the programmes he is participating in today, he would have been sitting at home.”

She added: “My advice to other parents in a situation similar to mine is, support them and help them become independent. Push them to find their potential because each one of us has something to give.”

Taylor said that being at Leeds City College has been a great experience and encouraged those unsure about taking that step ‘not to be worried because there is always someone to speak to’.

“Coming to college has made me more confident. Everyone at Leeds City College is here to help you to succeed and achieve your goals,” Taylor said.

“I have amazing classmates who are very supportive. The staff are also really great and my mum always tells me that as long as I try my best, the outcome doesn’t matter so that is my message to other students.”

Taylor is also doing well on his current course, with tutors praising him for his hard work and commitment. He is also supportive of his classmates.

Susannah Button, the special needs and disabilities (SENDCO) support lead said: We are an inclusive college for students to become independent and to develop the skills they need and Taylor is doing extremely well. He is such a joy to teach and an inspiration to us all.”

Alongside college, his work placement and voluntary work, Taylor is learning how to drive and hopes to get his theory and driving licence soon.

He is also hoping to help out in kitchens in Leeds that support and look out for the homeless.