It’s been proven time and time again that learning a new language is one of the best and most fulfilling things you can do and in Kimmy Barr’s case, her passion to learn songs in 23 languages is high on the agenda and she is making steady progress.

“The number 23 is significant to me and I’ve found over the years that a lot of things that have happened in my life have that number, including the day my bills go out.” 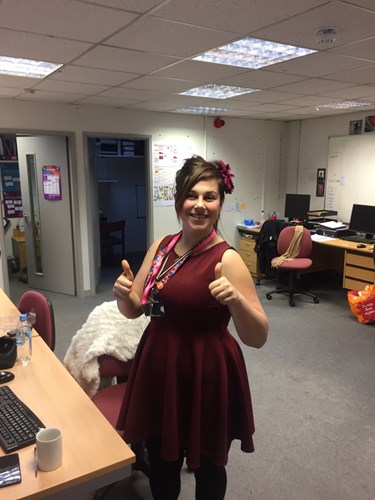 A Biology graduate, Kimmy, who is an apprentice teacher on the Access to HE Diploma in Science, said she enjoyed singing from a young age, adding that it helped her get through some tough times.

“The idea of singing in different languages came about after I went through a series of challenges including the loss of a parent.

“As a single parent, who was studying full-time whilst volunteering in youth groups and babysitting most weekends, I never really got the chance to grieve – I simply pushed myself through each day and music was a coping mechanism.”

Kimmy was very shy at school and often found it hard to fit into her surroundings.

Aside from wanting to be a science teacher, she also wanted to sing but didn’t feel she was good enough because no one around her was interested in hearing her sing. As a result, it knocked her confidence, though she soon discovered that it was something she enjoyed doing and that it made her happy.

“I used to write lyrics and then throw them away because I wasn’t convinced that they were worth hearing. However, just before I finished university, I began writing songs again and eventually summed up the courage to share them with my friends.

“I believe we all have a purpose. I think it is what makes us feel alive and the two things that give me purpose and fulfilment are singing and teaching.”

Kimmy, who felt isolated from the world for a while after being in an abusive relationship, said she is finally coming out of her shell and has started to make friends from all over the world.

“A friend of mine introduced me to the first song in a foreign language and I fell in love with it instantly. It is part of the reason I want to write and learn songs in different languages.”

She is now looking to finish her first book and record, produce and share as many songs as she can in several languages.